Much of what you (think you) know about NASCAR is wrong. Here, we bust some of the more popular “myths” about the sport, and its fans.

NASCAR is on the Decline
Many people point to dwindling attendance and TV ratings as proof that NASCAR’s best days are behind it. However, that’s just not true. NASCAR is still as popular as ever. The NASCAR Cup Series is the #1 or #2 sporting event watched each weekend with over 4 million plus viewers each week. The sport has 80 million fans spread equally across the United States and those fans, on average, consume nearly 10 hours per week of NASCAR content across all media channels. (Source: NASCAR Fan Engagement)

Race Car Drivers Aren’t Athletes
This is perhaps one of the more hotly contested debates, and has been for quite a few years now. Once again, the history of the sport is having an effect on the perception of its participants. Years ago, it wasn’t uncommon to see a driver working on a car while smoking a cigarette. Heck, there were even drivers who smoked while IN the car (even if just during cautions). You know, because in those days, the cars were real stock cars, and even had cigarette lighters in them:

Today, drivers are fanatical about working out, and you are much more likely to find them training for a triathlon than smoking a cigarette. They do this to prepare their bodies for the extreme conditions they are subjected to for 3-4 hours at a time with temperatures well above 100, and lateral loads of 3-5 G’s. For comparison, a space shuttle launch exerts 3 G’s on the astronauts for a few seconds. NASCAR drivers endure those forces for 3-4 hours at a time, without no breaks, unlike other sports where breaks in the action (and time outs) are common.

But it’s OK, you don’t have to take our word for it … science is on our side:
https://www.motorsport-safety.org/media/news/science-proves-it-racecar-drivers-are-athletes

Oh, and this says nothing about the pit crews who support the driver during race weekends. Many of those crews have former NFL or college football players on the roster. So, yah, there are athletes all over the track on race weekends.

NASCAR is a southern sport
This may have been true at one time, but it’s certainly not true today. In the “good old days” of NASCAR, the circuit rarely ventured out of the South with races primarily in Florida, Alabama, Georgia, North Carolina or Virginia. Today, the series runs events all over the country.

As the sport has grown over the years, it has spread out from its southern roots. Drivers and fans alike traditionally hailed from southern states. But today, 3 out of 5 NASCAR fans live in a region outside of the South and their geographic distribution mirrors that of the U. S. population. (Source: Nielsen Scarborough)

The Fan Base is Just a Bunch of Old White Dudes
Again, the sport’s heritage strongly influences this perception. But the modern day NASCAR fan is much more diverse than you may expect. Not only is the average age of a NASCAR fan within one year of the average age of all other major sports (Source: Nielsen Scarborough), NASCAR is #1 among major league sports in proportion to females viewing on TV (36%) and visiting the league site (44%). Female interest in the sport is also on the rise. Among new NASCAR fans (3 years or less), 58% are female (Source: Nielsen Co. and comScore).

Finally, in 2004 NASCAR formally launched an initiative to try and attract minorities and females to the sport. The Drive for Diversity program now counts among its alumni some of the popular young drivers in the sport today, including Kyle Larson, Bubba Wallace and Daniel Suarez. Whether it was due to this NASCAR initiative, or not, NASCAR is reaching more diverse audiences today. The proportion of NASCAR fans who are multicultural has increased from 20% to 24% in the past 5 years. Among new fans (3 years or less), 39% are multicultural (with 22% of them being Hispanic). (Nielsen Scarborough).

Many of the popular NASCAR myths are rooted in the sports origins and its history. Unfortunately, the public’s perception of the sport hasn’t evolved as much as the sport itself over the years. Don’t let conventional wisdom color your perception of a sport with national exposure, because it’s as popular as it’s ever been, and is reaching a more diverse audience daily. 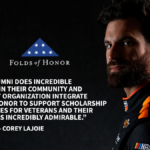 How a Race Team Sponsorship Comes to Life