“We’re thrilled to close out the 2021 NASCAR Cup Series season with our friends at Peacock with an absolutely incredible paint scheme,” said Spire Motorsports co-owner T.J. Puchyr. “NBC has provided robust and compelling NASCAR coverage since picking up its portion of the schedule in June at Nashville Superspeedway. Given all NBC does for the sport, we’re proud to fly the Peacock flag in Sunday’s season finale. Spire Motorsports prides itself on bringing exciting and vibrant paint schemes to the track and I think our design team knocked it out of the park with this one. We can’t wait to unload and finish out the season with a solid run at Phoenix.”

Haley earned his lone Cup Series victory in stunning fashion behind the wheel of Spire Motorsports No. 77 Chevrolet on July 7, 2019 at Daytona International Speedway. Over the last three seasons, the Winamac, Ind., native has made 35 starts on NASCAR’s senior circuit, tallying one top-five and trio of top-10 finishes.

In NASCAR Xfinity Series competition, he has earned four wins, 22 top-five and 64 top-10 finishes in 100 starts, including an appearance in the 2020 Championship 4. The 21-year-old is sixth in the series’ point standings heading into the final race of 2021.

While Sunday’s start will be his last for Spire Motorsports, Haley’s presence will be felt across the organization indefinitely.

“Justin Haley has been a staple with Spire Motorsports since we began this adventure and we’ll never forget celebrating our first Cup win with him at Daytona,” added Puchyr. “He’s done everything we’ve ever asked of him, and then some. Justin has an amazing opportunity in front of him with Kaulig Racing in the Cup Series next year. My business partner Jeff Dickerson and I are beyond proud of him and grateful for all he has done to help our team grow. We’ll always be close by and wish him only the very best as he moves into a full-time Cup ride next season.”

The NASCAR Cup Series Championship Race from Phoenix Raceway will be televised live on NBC Sunday, November 7 beginning at 3 p.m. Eastern Standard Time (EST). The 36th and final race on the 2021 NCS schedule will be broadcast live on the Motor Racing Network and SiriusXM NASCAR Radio Channel 90.

MYSTERY DESIGNER TO DEBUT ARTISANSHIP SHOWCASING SPIRE+ ABOARD NO. 77 CHEVROLET IN XFINITY 500 AT MARTINSVILLE SPEEDWAY 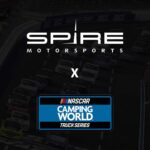